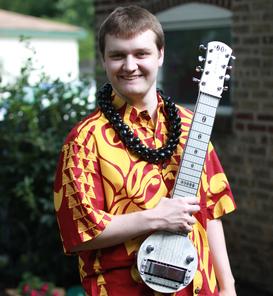 Keenan began singing and harmonizing from a young age while living in Japan, sharing the Aloha Spirit through mele (song) and hula (dance).  He watched and learned as the kupuna (elders) played and sang the traditional songs of his home. When he returned to Hawaii he sang in the Concert Glee Club at the Kamehameha Schools.  He also learned from his tutu (grandma) to play the upright bass, his favorite instrument.  He left Hawaii for Chicago 13 years ago and soon after began to play the 'ukulele.  Keenan looks forward to fulfilling his kuleana (responsibility) to perpetuate his Hawaiian culture by blending his harmonies, 'ukulele and bass with his Hoapili brothers.

Born and raised in Hawaii, Ron grew up surrounded by Hawaiian music and culture.  He always had music in his house and enjoyed his time singing in the school chorus. Ron lived in San Francisco for a while where he applied his previous knowledge of steel guitar and studied classical guitar and ukulele.  Ron discovered his true passion in singing.  From the shower to the car and now to the stage, this is where he is most comfortable.  Now living in Chicago, he has found his Hoapili brothers and re-ignited his passion for Hawaiian music.

Though Mark is well-versed in guitar, ukulele, and piano, he considers the steel guitar his primary instrument. He enjoys listening to steel guitar legends such as Jules Ah See, Sol Ho’opi’i, Jerry Byrd, and his teacher, Alan Akaka. Living in Illinois, Mark has been taking lessons from Alan through Skype. In addition, Mark enjoys traveling to Hawai’i. There he has further studied the instrument with Alan and performed in different parts of Waikiki. Mark is also the President of the Aloha International Steel Guitar Club and performs at their Winchester, Indian event annually. 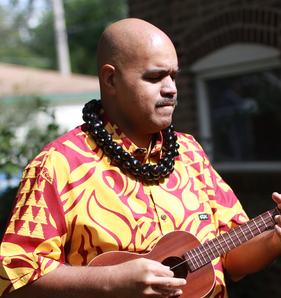 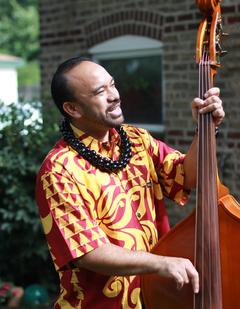 “It’s in your blood…” is what Danny would hear from his Mother throughout his life.  A great-grandson of the late Aunty Edith Kanaka`ole, Danny was born and raised on the Big Island of Hawai`I, primarily in Hilo.  Music began early in his life, from `ukulele to upright and electric bass to guitar, playing hawaiian, jazz, rock and funk.  Danny soon began juggling music with a career in radio and theatrical acting before moving to Boston in 1999.  After a long hiatus from entertaining, he moved to Chicago in 2009 to “start fresh!”  Through new friendships and guidance, Danny is elated to have found his Hoapili `Ohana! 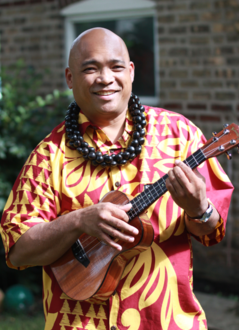